Adam Rozan: How would you describe Emily the Strange and her world?
Rob Reger: Emily and her world has been methodically and randomly created by myself and a vast host of other creatives over the last 23 years... one might describe Emily as a 13-year old girl, who prefers the company of her 4 black cats to that of the human variety. She is a unique visionary inventor, explorer, hero for the underdog (or undercat), artist, skateboarder, rocker, scientist, well-versed in the macabre and the enigma one might call the dark arts (but not your bland version of “witchcraft”). She is no witch, but she could teach a witch a thing or two if she wanted to. Her world consists a lot of her creations centered on the interests listed above -- lots of black (her favorite color). Through the stories and comics we have written and illustrated, her world is vast but almost always includes the surreal, strange, and feline; think Dr. Seuss meets Motörhead. Her “brand” -- an outsiders look at her world -- likes to include and involve popular cultural influences that have shaped her creators. That would be rock-n-roll album covers, or the vibe of one of the world’s legendary strangers in art. Her four cats, Sabbath, NeeChee, Mystery, and Miles are her closest allies, and each understands her mission at hand, and they are there to serve, accompany, and entertain her vast interests.

AR: You’ve been drawing Emily for years. What have you learned about her recently that you did not already know?
RR: She has more cats than I originally thought. And more expressions. And, dare I say it, friends. She need not be in the SAME clothing all of the time. I’ve learned a lot about drawing her from my most recent comic book illustrator collaborators. They have imagined Emily in poses, outfits, and expressions that I never would have conceived on my own. Thanks Emily Ivie and Cat F!

AR: One of the things that I appreciate about you and Emily the Strange is all of the many artistic influences that can be seen in the work, from The Beatles and KISS to M.C. Escher and Edward Gorey. What can you tell us about that? Do you think about integrating various music or artists into the work, or does it just happen?
RR: We integrate a lot of our influences, inspirations and muses into the world and art of Emily the Strange, both as literal homage -- to inform our fans of those greats who influenced us and are worthy of checking out if they were previously unfamiliar -- and also as unauthorized collaborations, to have fun integrating art, lyrics, words, imagery from some of our favorite creative masterworks. Some of these include animated greats, such as The Yellow Submarine and The Wall, but also Dr. Seuss, Rube Goldberg, and Motörhead. A nice mix of strange (aka weird, surreal, abnormal) with clean design, cute imagery (cats, flowers) and an edge of graphics is a great equation for an Emily work of art or story.

AR: What advice do you have for young artists today? Is there still a relevant distinction between “fine” artists and “graphic” artists?
RR: I think there are great artists who are not good graphic designers, great graphic designers who are not necessarily artists, but my preference usually lies somewhere both are combined. I view fine art as imagery or other medium / media to express an idea -- to which the idea and vehicle for that idea is most important, and craft or design is often less important to that of the concept. I think that graphic design’s purpose is to get “any” message across in an interesting and appealing or affective way — no matter what the idea or message or story is. Again, I prefer it when an idea is delivered well-crafted and with great skill, and for great graphic design to be supported by a decent message. Call me picky!

AR: What’s the future like for Emily?
RR: Animated film and/or TV show, music (songs, animated videos, stage performance), some short stories and comics, lots of art and art books, a growing posse of cats, and I would love to do a more in-depth video game and, of course, create some sort of them park attraction to enjoy a full body and mind experience.

AR: Cats are essential to Emily's life. Are they essential to your life?
RR: YES, indeed! Cats have been a part of my life since early childhood. Each has been instrumental in the moments between all the fuss and hurrah. Chillin’ and playin’ and pettin’ and cuddling with the cats helps bring sanity back in my life. And they are so fun to draw and sculpt! Cats are the perfect model for the way I like to draw, and are so expressive with such basic changes to their posture, ears, eyes... And I can totally identify with every cat-lady out there… If I could settle down enough to have a cat sanctuary, I would (or will).

AR: As you know, we're hosting this collaboration because of the Museum's new program, Meow, which has multiple cat-related angles. As an artist who gives his cats a proverbial voice, what do you think that cats themselves would think of all this? They would be all like, “told ya so! We rule the world, and you know it. Now feed me. And let me out of the house, and back in again, and out again. And, wake up, it’s time to get on with the day.” And take more naps. 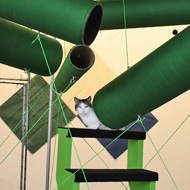 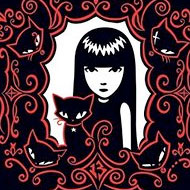