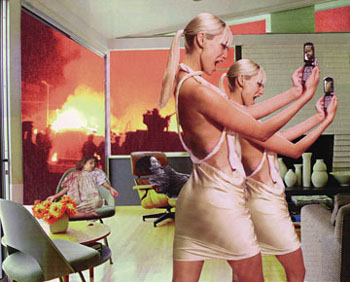 Martha Rosler: Bringing the War Home is the first museum exhibition to bring together Rosler's two landmark series of photomontages. In the pioneering series, Bringing the War Home: House Beautiful (1967-1972), news photos of the Vietnam War are combined with images from contemporary architectural and design magazines. The prosperity of postwar America is integrated with images of soldiers, corpses and the wounded. Made during the height of the war, these images were originally disseminated in underground newspapers and on flyers and were made, in part, as a response to the artist's frustration with media images, reporting techniques, and even some anti-war propaganda. The recent group, Bringing the War Home: House Beautiful, New Series (2004) combines news photos of the Iraq War with elegant landscapes and interiors from magazines, raising questions about the connections between advertising, journalism, politics, sexism, and violence. Rosler's montages re-connect two sides of human experience that have been falsely separated - distant wars and the living rooms of America.

A Conversation with the Artist: Martha Rosler
Thursday, October 18, 7–7:30PM
In conjunction with the exhibition Martha Rosler: Brining the War Home the artist discusses the significance of this exhibition and her work with Curator of Contemporary Art, Susan Stoops. Held in the Contemporary Gallery with reception to follow in The Museum Café. No RSVP required. Free with Museum admission.

Lecture: Howard Zinn on Bringing the War Home
Sunday, November 11, 2PM
Noteworthy historian, playwright, and social activist Howard Zinn will speak in conjunction with the exhibition by contemporary artist Martha Rosler: Bringing the War Home. Using his historical research and personal experiences, Zinn will make parallels between Rosler's work and our nation's history with conflict. It is by no accident that this event will take place on Veteran's Day, and as such will be a time for reflection by people of all political beliefs and past experiences. Lecture will be held at Tuckerman Hall. Museum Members $15, Non-Members, $20, Veterans Free. Pre-registration is required. For student group rates, please call 508.793.4333 or 508.793.4334, or register online. Event is followed by reception in the Worcester Art Museum galleries.

This exhibit, and related educational programming are supported by the Dan and Mary Melville Contemporary Art Fund and by Worcester Magazine. Additional support provided by grants from the Massachusetts Foundation for the Humanities, a state affiliate of the National Endowment for the Humanities, and the Worcester Cultural Commission, a local agency which is supported by the Massachusetts Cultural Council, a state agency.