In preparation for Antioch: The Lost Ancient City, many of the mosaics included in the show received conservation treatment. During the 1930s excavation, concrete backings with iron reinforcing rods were applied to the mosaics and areas of loss were also filled with concrete that, in many places, extended over original mosaic surface. When the mosaics arrived in American and European collections, further restorations were undertaken. In some cases, concrete was removed and the losses filled with ancient or modern replacement stone tesserae. In other instances, painted restorations, often imitating tesserae, were employed either over plaster fills or by painting directly on the 1930s concrete. Various varnishes were also applied in an effort to saturate the mosaic colors. 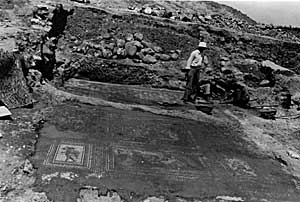 Conservators strengthened areas where cracks in the concrete backing arose from corrosion of the iron reinforcing rods or from impact stresses on the brittle concrete. Discolored surface coatings were removed, as were remaining concrete fills and inaccurate painted restorations. Stone tesserae restorations were retained where accurate and otherwise removed or covered with tinted Japanese tissue. In most instances, losses to the mosaic surface were filled with a reversible, acrylic lime mortar, recessed to clearly demarcate the line between original and restoration. The mortar was colored and textured to recede optically and allow the viewer to focus on the beauty of the surviving original. In some cases, where this approach was not sufficient to visually integrate the mosaic, replacement tesserae made of plaster or paper pulp were glued in position and painted to match the original.

Conservation work took place over a period of five years and involved six conservators. Much of the work was labor intensive since concrete fills had to be carefully removed using scalpels and fine chisels so as not to damage underlying stone and glass tesserae. Steel or aluminum travel frames were also fabricated and attached to the mosaics to protect them during shipment and installation.