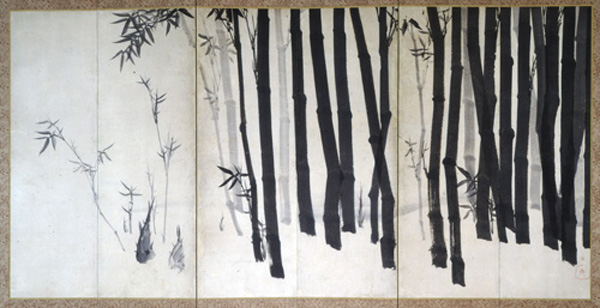 Better known for bizarre figure paintings with strong color and eccentric brushwork, Rosetsu's breadth can be seen in the present painting, a relatively peaceful work. It is characterized by broad brush strokes, interrupted only by the nodes of the bamboo, and by a dependence on ink tone rather than line in defining form. The date can be inferred from the condition of the lower seal, known to have been broken at its upper right corner in 1792.

At about age twenty-five Rosetsu became the pupil of the Kyoto painter Maruyama Okyo, one of the most popular and prolific Japanese artists of the eighteenth century. Within four years he had become a respected painter in the Okyo tradition of detailed linear description of objects, his work differing from that of his master in its greater dynamism in composition and distortion of line. In 1786-87, after a trip to the southern part of Kii Province the younger artist turned away from a linear style to one based on washes and shading.