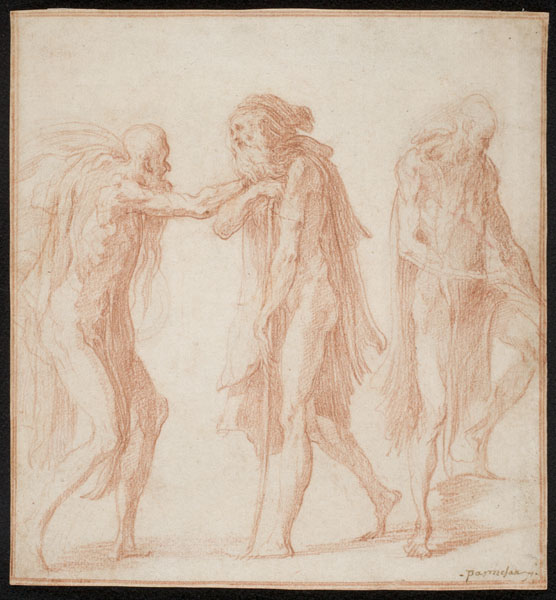 The most influential master of Italian Mannerism, Parmigianino developed a personal style that was widely imitated throughout Europe in the following generations. He was a remarkable draftsman, and hundreds of his drawings survive. Some relate specifically to his paintings and prints, while many others reflect the activity of a compulsive, continually inspired artist. This seemingly quick and unplanned sketch represents three emaciated old men, perhaps ascetic monks or philosophers, who resemble the mysterious sage standing in the background of Parmigianino's famous painting The Madonna of the Long Neck (now in the Uffizi Gallery in Florence). It is assumed that the drawing dates from the same period, when the master worked in Parma around 1535. The craggy bodies and scowling expressions of these old men in their tattered garments imply a disregard for the outside world. Their wizened faces and contemplative expressions suggest the wisdom of age and experience. Although the poses seem doddering, there is an elegance in the figures' artificially attenuated, gnarled limbs.