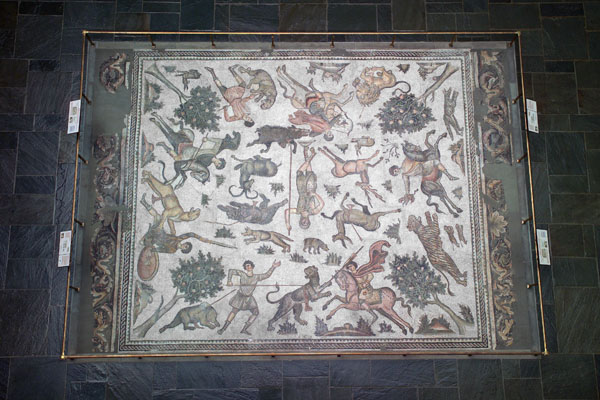 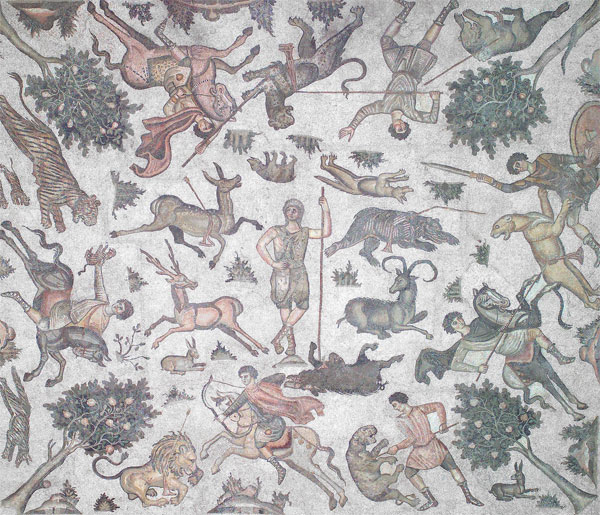 This pavement, excavated from a villa at Daphne, a resort in the hills above ancient Antioch, depicts the hunting of dangerous game, an aristocratic pastime represented in mosaics and other media throughout the Roman world and commonly at Antioch. At the center stands a hunter ringed by animals in a pattern much like that of an oriental carpet. Hunters on foot and horseback attack a variety of animals with sword, spear, and bow and arrow, a weapon used by Parthians and Persians to the east.

Situated near the eastern coast of the Mediterranean Sea, the great city of Antioch became a confluence for cultural influences from western Greco-Roman traditions as well as eastern Persian sources. While the dress style in this work is that of Hellenistic Greece, the ornamental use of nature and the figures' stiff poses derive from the art of ancient Parthia (now northern Iran). The animals, portrayed more naturalistically than the human figures, are used to fill compositional voids in a decorative fashion, resulting in the flat, two-dimensional creation characteristic of Antioch.